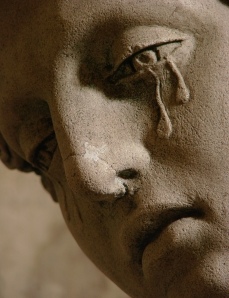 So you must not be frightened if a sadness rises up before you larger than any you have ever seen; if a restiveness, like light and cloudshadows, passes over your hands and over all you do. You must think that something is happening with you, that life has not forgotten you, that it holds you in its hand; it will not let you fall. Why do you want to shut out of your life any uneasiness, any miseries, or any depressions? For after all, you do not know what work these conditions are doing inside you.
― Rainer Maria Rilke, Letters to a Young Poet

For me, these shifts have sometimes been cataclysmic; soul shaking, mind quaking perspective altering experiences, the culmination of things of which I haven’t even been fully aware, of a subterranean consciousness erupting like a fault line across the core of my being.

When it happens, for whatever reason it happens, everything along that fault takes on a new relevance, appears in a new light. As I felt the chasm of change yawning open beneath me I found myself attending the play, The Brothers Size, with some good friends. The play came as a complete and utter and powerful surprise, performed in the tiny Mad Cow Theater in Orlando.

Written by playwright Tarell McCraney, the play is intended to be a “call and response” between performers and the audience.  An intimate view of the lives of two brothers intertwined with a third character, set in the Yoruban subculture of Louisiana, the tiny theater in the round gives the experience of looking in a window as private lives play out before you. McCraney’s characters routinely break the fourth wall, and in the little theater setting, you find yourself looking into their eyes, as if the people you were looking at through the window suddenly looked up and not only saw you, but saw into you.

In that 90 minutes, the ground shifted further, and I felt the pull of art and music, and the call of the muse as I haven’t heard it in many many years, a clear siren song as filters and walls fell away.

We live in a society that wants to medicate away every pain and tug of sadness, to dull the ache and emptiness of depression or sorrow. And yet watching the Brothers Size, and listening to the performers during the talk back session after the play, was a reminder that from pain beauty and wisdom can flow.

“Melancholy is the only Muse.  She is Thalia and Melpomene. She inspired Milton and Michael Angelo, and Swift and Hogarth. All men of genius are melancholy – and none more so than those whose genius is comic,” observed Hartley Coleridge, the son of Samuel Taylor Coleridge,) in the somewhat redundantly titled 1823 work, “Atrabilious Reflections upon Melancholy” (“Attrabillious” means gloomy, morose or ill tempered – or melancholy).

More recently, researchers like Joe Forgas, a social psychologist at the University of New South Wales in Australia, looked into the benefits of negative moods (Feeling Sad Makes us More Creative, in Wired), and found that angst and sadness promote “information-processing strategies best suited to dealing with more-demanding situations.”

“Why do you want to shut out of your life any uneasiness, any miseries, or any depressions?” asks Rilke, “For after all, you do not know what work these conditions are doing inside you.”

Some might argue these conditions can do destructive things inside us.  On the way to the theater we had to pass the Pulse Nightclub, site of the one of the worst mass shootings in American history, just a couple of weeks ago.  The nightclub has become a shrine, covered in murals and cloaked in flowers and the offerings of a heartbroken community.

Horrible as that was, and fine though the line may be between the madman and the genius, I believe that violence is the rare exception rather than the rule for most of us encountering depression or the inexplicable bout of sadness.  Learning to look at the dark moments in our lives, head on, and to embrace  and creatively express them, can be a strengthening experience, and at least in my life, has helped me see the way forward more clearly.

A friend once told me that when he went through his melancholy periods he felt like part of him died, that he lost something he would never get back. That’s probably true , but I would ask if it was time for that part to go, to make room for a new way of being and seeing and understanding? Was that part holding me back, blinding me? Is it sorrow that clears my vision?

Much of our popular culture – from prescription and recreational drugs to rampant consumerism and celebrity fixation- is designed to distract us from the everyday heartaches that make up life, and that, looked at more honestly, might help us better connect with, and care for,  one another. Maybe that’s why so many people cried when they spent a moment intentionally looking into one another’s eyes in the Eye Contact Experiment – because they saw the depth of our shared human longing there.

When Thomas Jefferson put “the pursuit of happiness” right up there next to life and liberty as an inherent and inalienable right,  we mistook that to mean that happiness itself was the ultimate goal.  But it’s the pursuit, that Jefferson was protecting – our search for that “thing” that could just as easily have been called fulfillment or purpose or meaning.  And the course of that pursuit is sometimes a melancholy one, from which stems the inalienable right to the understanding and insight that is the true birthright of the reflective human being.

“Life is a series of natural and spontaneous changes. Don’t resist them; that only creates sorrow. Let reality be reality. Let things flow naturally forward in whatever way they like,” said Lao Tzu .

My world has shifted, and that’s okay. I’m ready for the next part of the journey.