Be wary of the roles you play and the acts you put on, because you tend to fulfill the labels you accept. Above all, remember the more harm you cause, the more hate you feel. The more kindness you express, the more you come to love those you help. – David McRaney, author of You are Now Less Dumb 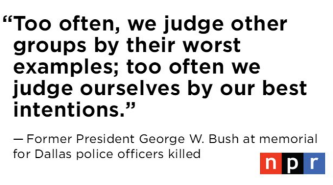 actually is and our impression of it is an objective, accurate representation of “reality”.  Or put another way, it is “the conviction that one’s own views are objective and unbiased, whereas the other’s views are biased by ideology, self-interest and irrationality. ” (Naive Realism as a Barrier in Conflict Resolution)  It’s also a great obstacle to  self-awareness, civility and social justice.

Naive Realism is at the heart of a thoughtful piece in Brainpickings on the Benjamin Franklin Effect and how to handle “the Haters”, a particularly apropos piece  at this point in history, as we try to have difficult conversations with one another across the known territory of our experiences.

It’s easy to see how our individual stories are necessarily constructed using the only tool we have for creating meaning in our world: our own brains. We sometimes talk about “getting inside” someone else’s head,  a challenging effort at best, especially if the head we’re trying to get into lives in a world far different from our own.  Even if we get in there, will we recognize anything we don’t have first hand experience or knowledge about?  And why do we need to anyway?

Well, leadership consultant Paul Warner will tell you that, “Naive realism is one of the biggest obstacles to self-awareness in leadership. A practical example of this is coaching a leader on 360 degree feedback results. Often, information expressed in the 360-degree feedback report provides a clear indication that the leader needs to change. A typical response to this information is to shift blame to either the people they work with, the organization, or other factors outside of themselves. The inability to see their behaviors through another person’s eyes can be traced to a need to preserve their self-image and their leadership abilities.”

Sound familiar?  There’s a lot blame going around right now at the same time that there’s an obvious need and desire to find some common ground to stand peacefully upon.  But we can’t have a conversation if people aren’t willing to look beyond their own experiences and preconceived ideas.  Just supporting your own view all the time doesn’t accomplish anything.

The University  of Massachusetts at Amherst did a study in 2000 to try to find a way around the challenge  (Overcoming our Biases: Helping Observers see Both Sides) .  The study looked at whether simply informing people about their inherent biases and asking them to come up with alternate explanations for negative behaviors would help them be more open minded.  The results? ” As expected, informing people about the liking bias did not reduce bias. Contrary to expectations, neither did generating alternative explanations.”

So beyond being aware of our tendency to project the world as we know it onto the world as others experience it, is there anything we can actually do to overcome or work around our own naive realism ?

Warner says leaders have to be more than aware of the issue, they have to be ” open to another interpretation (or perception) about their leadership abilities. ”  He uses a 360 degree feedback process with intense coaching, to ” break down personal barriers to understanding the perceptions of others and ultimately reducing naive realism. ”

Benjamin Franklin did something else: He reached out.   Faced with his own virulent detractor, wrote author David McRaney,  ” Franklin sent a letter to the hater asking if he could borrow a specific selection from his library, one that was a “very scarce and curious book.” The rival, flattered, sent it right away. Franklin sent it back a week later with a thank-you note. Mission accomplished. The next time the legislature met, the man approached Franklin and spoke to him in person for the first time. Franklin said the man “ever after manifested a readiness to serve me on all occasions, so that we became great friends, and our friendship continued to his death.”

The experience is the basis of Franklin’s timeless adage, “He that has once done you a kindness will be more ready to do you another, than he whom you yourself have obliged.”

“The Benjamin Franklin effect,” says McRaney, ” is the result of your concept of self coming under attack.  …Whether you love or hate your persona, you protect the self with which you’ve become comfortable. When you observe your own behavior, or feel the gaze of an outsider, you manipulate the facts so they match your expectations.

Of course, as the website Changing Minds , points out, “The reverse effect is also true, and we come to hate our victims, which helps to explain wartime atrocities. We de-humanize the enemy, which decrease the dissonance of killing and other things in which we would never normally indulge.”

So what might all this mean for those of us trying to find our way through the rhetoric and to actually understand different points of view?

Well, first of all, we need to actually want to try to understand them.  If we don’t,  then we shouldn’t pretend to, and it’s probably best to just bow out of the conversation altogether, because we’re not going to change anyone else’s minds that are as intractably set and closed as our own.

But if we really do want to understand  – if we actually want to be part of the conversation – then we need to be conscious of our tendency to simply reinforce views we already have to keep our self-constructs secure and intact, so that we can rise above our biases.

Then  we need to be willing to reach out and ask for help understanding, to ask to borrow some good books on the topic we’re trying to understand, to ask for an article, website or film recommendation.

And then we need to read, watch, listen and learn.   A society of listeners might be  a good thing about now.