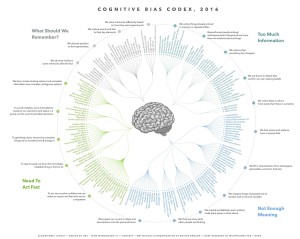 I’m well aware that we have a very human tendency to think we’re being open minded when we’re mostly supporting our own existing world views.  Buster Bensen did a great piece on the issue of cognitive bias over on Better Humans recently and even provided a handy “cheat sheet” for improved self-awareness.

But even with my bias chart at hand to help 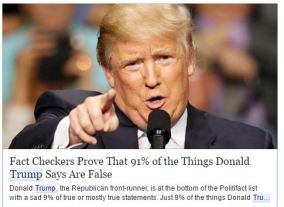 me approach the current political landscape with a truly open mind, I don’t see any other way to view the current Republican candidate as anything but an immature, manipulative,  narcissistic bully unfit to shine the shoes of any American, let alone function as the leader of our democratic republic.

While I understand that he somehow speaks to the heart of the frustrations of disenfranchised white, mostly male, Americans, surely other candidates can address those issues in more professional, civilized and truly effective ways.  It is important to note that this is not a conversation about the suitability of the other candidate as an alternative, but simply 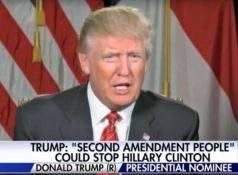 about the utter unsuitability, complete lack of qualifications, inadequate temperament, experience, expertise, and skills, the dishonesty, tom foolery, mean-spiritedness and willful ignorance of the man currently running on the Republican ticket.

I would like to think that those feeding his ego by buying his semi-truck loads of raw fertilizer will see by election time that he’s mocking and using them, too.  It should be abundantly clear by now that he has no respect for his constituents; that, in fact, he probably views his constituency as mere tools, cogs in the machine of his aspirations that ultimately have nothing to do with upholding the Constitution , or protecting , educating or improving the economic, social and environmental landscape of our citizenry, or representing our country in the global community with class, dignity and grace.

re all often played for fools by politicians -and no matter what this candidate says he is now every bit a politician. But no one, I think, is being played for fools more than the Republican candidate’s followers. The Democratic candidate erred by calling some of his followers “deplorables”, but I suspect he doesn’t think much more highly of them himself.

He’s playing the politics game, but he’s playing everyone, from his own followers to the media, not for political gain, but for personal amusement, the mo

st deplorable use of fellow humans in human history.   I hope that becomes abundantly clear before the polls open and before people vote for him thinking he’ll actually make their lives or our country “great” in any way.

And then we’ll all lose, especially those who trust him most.