Just try new things. Don’t be afraid. Step out of your comfort zones and soar, all right? Michele Obama

In a recent article in Aeon,  titled Now THAT was music, writer Lary Wallace sets the stage for his rather generalized conclusions on our ability (or inability, in his case) to appreciate new music. He starts with the assumption that we all experience this “One grim day (when youth is over)”  and “you find that new music gets on your nerves.”

“Some of us are more susceptible than others, ” he says with authority, “but eventually it happens to us all. You know what I’m talking about: the inability to appreciate new music – or at least, to appreciate new music the way we once did. There’s a lot of disagreement about why exactly this happens, but virtually none about when. Call it a casualty of your 30s, the first sign of a great decline. Recently turned 40, I’ve seen it happen to me – and to a pretty significant extent – but refuse to consider myself defeated until the moment I stop fighting.”

Why, he asks, do our musical tastes “freeze over”?

I got news for you Lary.  It really doesn’t happen to all of us.  I’m nearing 60 and love a wide range of new music.  I always have . I plowed through the 60s , 70s and 80s, and found something I’ve loved in every decade. I got busy with kids at the turn of the 21st century, but they kept me current on everything from technology to literature and music.  Today, my contemporary musical tastes range from Marian Hill,  Paloma Faith, Mumford and Sons, Passenger, Ed Sheeran and Kaleo to Van Morrison, Steely Dan, Jethro Tull, the Beatles and other classic musical artists.

I continue to enjoy an enormous range of contemporary music and genres, as well as maintain a healthy appreciation for the music that came before it.   Being part of the FIRST youth robotics community probably hasn’t hurt, because all the competitions are a rich amalgam of musical traditions that has kids singing and dancing to everything from Sweet Caroline to Bohemian Rhapsody to modern EDM (Electronic Dance Music) and hip hop.

But Mr. Wallace’s article is worth a look-see, even with its inherent contradictions ( barely a  paragraph after he maintains that the musical taste freeze-over “eventually happens to all of us,” he then says, “For one thing, it doesn’t happen to everyone. Musicians seem particularly immune, for obvious reasons, and so do certain types of journalists…”  ).

So with the caveat that what’s being presented is more anecdotal than evidence based, despite the authority with which the conjecture is presented,  it’s a good opportunity to consider the characteristics of adaptability and the ability to not only embrace but to actively seek out new music,  along with new ideas and new experiences.

“Most of us stop responding to new music because we know better,” writes Wallace. “You can read that sentence and its last word any way you want; it’s still going to apply. But even if we don’t know better, per se, we still know just as good, and so we know enough to understand that it’s been done before, whatever this is we’re listening to. All of which is another way of saying: you lose your virginity only once.”

Well, yes, but presumably you don’t stop enjoying sex after you lose your virginity because if you’ve done it once you know all you need to about sex and it will never be enjoyable again.

Despite Mr. Wallace’s largely anecdotal contentions about age and music, there’s plenty of evidence to support the more useful idea that to the adaptable, to those not only willing but eager to embrace change,  go the spoils  of success and happiness. 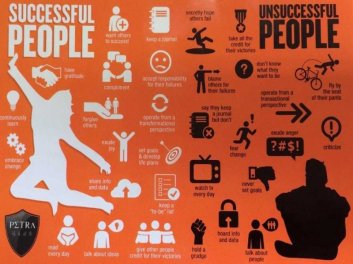 From “The Differences Between Successful and Unsuccessful People” –

“…every analysis of what makes lucky and happy people lucky and happy demonstrates they adapt fast and well to new situations and people, and so are defended by complex social circles and acclimatised to change. They offer and request help and are free to embrace what’s positive in life’s inevitable alterations. They don’t try to impose stillness on a universe which is in motion. They know real security involves a degree of exposure,” notes writer and performer AL Kennedy (A Point of View: Why Embracing Change is the Key to Happiness, BBC)

I’m not talking about change for the sake of change here, that uniquely American capitalist quality of a thousand breakfast cereal brands that are all just slightly different from one another but are essentially tastelessly the same. I’m talking about the inevitable progress of life that compels the intelligent, curious and capable individual to explore the world around her fearlessly and passionately at each new turn.

“I’ve always been somewhat suspicious of those who truly do, as the overused phrase has it, listen to everything. Such schizophrenic tastes seem not so much a symptom of well-roundedness as of an unstable sense of self. Liking everything means loving nothing. If you’re so quick to adopt new sentiments and their expression, then how serious were you about the ones you pushed aside to accommodate them?” 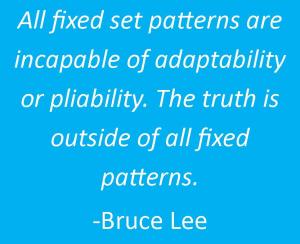 My! Such vitriol against the adaptive.  Not sure how having a wide range of enjoyments unequivocally equates to “schizophrenic tastes” and “loving nothing” but I would contend that the more you like, the more there is to love, as well.

“If you always put a limit on everything you do, physical or anything else,” said Bruce Lee. ” it will spread into your work and into your life. There are no limits. There are only plateaus, and you must not stay there, you must go beyond them. ”

The emphasis in Lee’s statement is mine, because I think this is a critical point about life and living:   We are never done; we have never “arrived”.  When things settle down, we have simply reached a plateau.  Some people choose to stay on a comfortable plateau for the duration, and that’s fine.  You can stay there and listen to the music of your 20s forever, if you’d like.  But don’t chuck stones at those on other plateaus or moving past yours, because what you may see as the pinnacle of life, others may see only as a middling way station (and vice versa, over achievers!)

For me, life – at least what I believe to be a life well lived –  is a continual work in 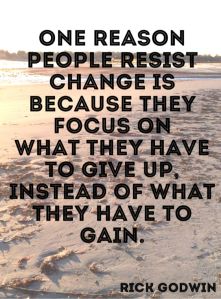 progress until we take our final breath.  It’s easy to fall into patterns of being, because human adaptability is a double edged sword.  We can just as easily adapt to unsatisfying and ineffective ways of being, as we can to new and better ways of being.

“A martial artist who drills exclusively to a set pattern of combat is losing his freedom,” said Lee, who reflections on martial arts hold water for life in general. “He is actually becoming a slave to a choice pattern and feels that the pattern is the real thing. It leads to stagnation because the way of combat is never based on personal choice and fancies, but constantly changes from moment to moment, and the disappointed combatant will soon find out that his ‘choice routine’ lacks pliability. ”

more akin to servitude to a choice pattern he’s created through his own story about what makes good music, rather than to any actual musical taste “freeze.”  For years, I told myself the story that I couldn’t draw.  That was a choice pattern, a reality I created for myself without actually ever testing it.  When I finally decided to see if that was actually the case, I discovered that not only could I draw, but that the experience of drawing changed my perspective on many other things I had thought to be true of myself, and a wealth of new opportunities have opened up for me, as a result.

The same can be said of classic institutions like libraries, with which I often work and who are being asked to embrace enormous change, and things like education and work in the 21st century.   We simply can’t continue to apply old ideals to new realities, or to hearken back to the mythology of the “good old days” which were steeped in social and economic inequity worse than what we have today.

“Approaching the changing reality of reality with sensible flexibility is the best strategy for happiness. I don’t believe it,”  says AL Kennedy, ” but it’s true. And if I can change my mind, I can change anything else I need to. ”

The only limits you have are those you set for yourself.  So go ahead: Listen to all the music, do all the things,  and soar.