Our new government is founded upon exactly the opposite idea (of “equality of the races”) ; its foundations are laid, its cornerstone rests, upon the great truth that the negro is not equal to the white man; that slavery subordination to the superior race is his natural and normal condition. This, our new government, is the first, in the history of the world, based upon this great physical, philosophical, and moral truth. This truth has been slow in the process of its development, like all other truths in the various departments of science. – “Corner Stone” Speech, by Alexander H. Stephens, Vice President of the Confederacy – Savannah, Georgia – March 21, 1861 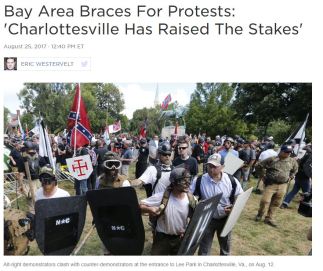 Whether you believe the cause of the American Civil War was slavery, or economics or the economics of slavery, the Civil War comprises a period in American history that must always be remembered but never celebrated.  While there may have been  people of   integrity fighting for southern independence, the ultimate goal of that independence was neither noble nor of moral integrity.   The words of Alexander Stephens, vice president of the Confederacy, should leave no doubt as to the purpose of the Confederacy, which had nothing to do with heritage and everything to with white supremacy.

To say that slavery was the custom of the day and for that reason somehow excusable, is reprehensible.  Human trafficking, a relentless form of human slavery,  is still a custom in many parts of the world, including parts of the U.S. , and we don’t memorialize those involved in that crime against humanity.  The mere fact that there was a massive schism in our nation over the issue of slavery – that many recognized it for the barbarism that it is even when it was common – is reason enough not to memorialize or celebrate the cause of the Confederacy.

By 2055, use of the term “minority” in regards to race will be obsolete as no racial or ethnic group will be a majority in the U.S. – Pew Research Center, Shutterstock image

Robert E. Lee may have been a fine man, but he stood on the wrong side of history. His cause was not a good one and he rightly met with defeat. Remember him as a great military strategist if that’s important to you, but do not confuse strategic genius  with righteousness or moral integrity.  In the 21st century, we should not have monuments or name institutions in honor of people who fought to preserve an archaic, perverse and inhuman feudal economic system, and who believed in the subjugation of others and attempt to justify that dark period in our history as “heritage.”

The Confederate cause is no more a part of our American heritage to celebrate than is fascism or Nazism . These things are the antithesis of what it is to be an American, and for U.S. citizens in 2017 to be equating white supremacy with patriotism is ignorant and decidedly un-American.   The Confederate flag is not the flag of the United States, anymore than the Union Jack.

There are more important things to address like education, healthcare, economic well being and other more vital issues that concern us all.  It’s time to stand together against hate and ignorance, unified in our diversity.   The Civil War ended over 150 years ago.  It’s time to stop 19th century cosplaying, grow up and move on.