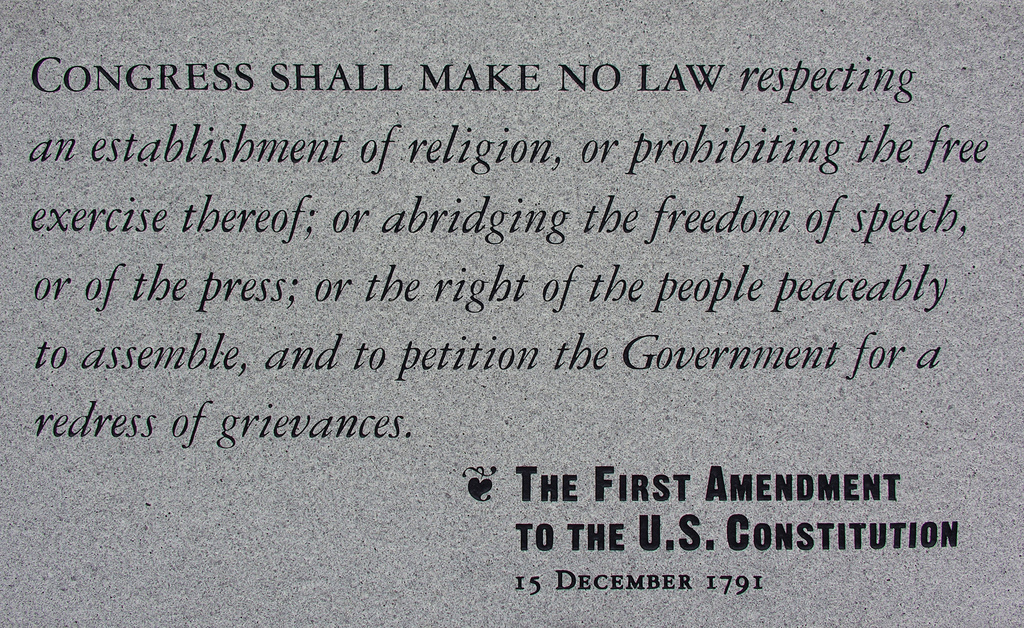 – Jack Johnson, in Don’t Believe a Thing I Say

So now we have a Ministry of Religious Liberty.

Oh – my bad.  Attorney General Jeff Sessions created a Religious Liberty Task Force this week – although the effort was really launched in October 2017, when Sessions issued a Memorandum to All Executive Departments and Agencies on Federal Law Protections for Religious Liberty that largely flew under the radar until the announcement of the task force on July 30.

The October memo outlines “twenty key principles of religious liberty in U.S. law” and provides direction to agencies in four areas:   employment, rule making, enforcement and contracting/grant making.  The twenty key principles (you can read them all in the link) include things like:

One might be tempted to find a silver lining of solace in this black cloud of nascent theocracy by noting that these “key principles” are devoid of any specific religious reference, and by implication protect all religions equally.   But how does one resolve the conflict between Title VII of the Civil Rights Act of 1964 that prohibits employers from discriminating against people on the basis of their religious beliefs,  with the idea that “religious employers are entitled to employ only persons whose beliefs and conduct are consistent” with their own?

Conversely, the memo suggests that an Islamic baker could refuse to bake cakes for a Christian heterosexual couple without any repercussions.   Unless, perhaps, the Christian couple complains that their religious liberty has been curtailed by the Islamic baker.  Then we’re off and running to a whole new level of Constitutional revisionism.

As Out and Equal pointed out, in response to the Attorney General’s announcement, the real victims here, though,  are not necessarily religious adherents. 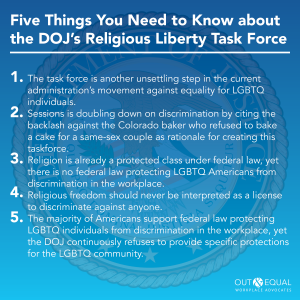 statement and creation of the task force puts LGBTQ Americans at further risk for discrimination and is an obvious front for biased against LGBTQ employees. This action taken by the Department of Justice further blurs lines between acceptable behavior and discrimination.”

Welcome to 1984, to Animal Farm, to the toasty hearth of Fahrenheit 451.  It’s astounding, absolutely astounding, to be on the teetering edge of what feels like a 21st century American Dark Age.

The thing is,  we’re afraid of all the wrong things –  a human tendency surgically exploited by snake oil salesfolk and corrupt governments alike.  We’re being encouraged and goaded into being afraid of immigrants, the free press, ethnic, racial and gender orientation differences, of faiths not Christian.

When what we really should be afraid of is unrestrained wholesale commercial exploitation of our environment, commensurate human induced climate change, creeping fascism, suppression of our 1st Amendment rights, government supported violence against citizens, a “return” to racist, homophobic, misogynistic “family values,” and a tax payer funded “religious liberty” task force.

Social media is abuzz with civil rights outrage and religious conservative glee that further divides us, to the sole advantage of those who benefit from our divisions.  A Canticle for Leibowitz relentlessly comes to mind.  Some try to console with assurances that this, too, shall pass.  But these are some of the same individuals who never believed this current administration would ever have been possible in the first place.

The fact is, it took a couple or three generations to get to where we are in history today, and it may well take another couple or three generations to evolve out of it, if we do at all.   I don’t have any real solutions, other than staying informed, writing and speaking out publicly whenever and wherever possible to point out naked emperors and blatant falsehoods and mythologies.  We can’t stay silent. We mustn’t.

This is also why it’s so critically important that our public institutions like libraries and schools, colleges and universities stay strong, relevant and challenging, and why we need to reject the disempowering superhero trope  that encourages us to look for fear in all the wrong places, and to abdicate civility and common sense to government oversight and “protection.”

Civil rights require civic vigilance, and the strength and courage to see through the smoke and mirrors of targeted fear mongering.

Resources for staying informed and proactive regarding Constitutional rights: